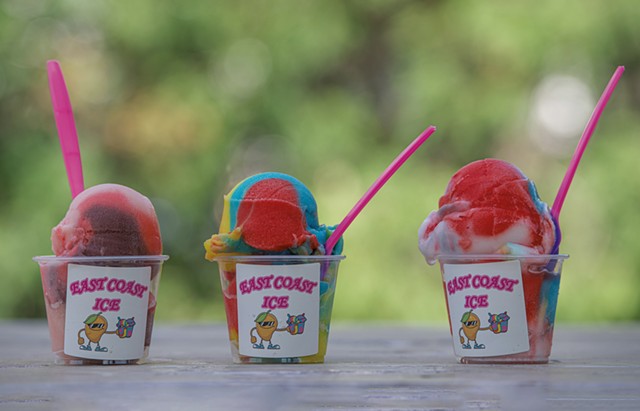 No matter what the calendar says, summer officially starts in Vermont when the snack shacks and food trucks open for business. And it ends when the risk of frostbite exceeds the desire for a maple creemee.

We squeeze every last drop — or creemee drip — out of the fleeting time when vegetables fill farm fields and cooking and eating outside are a way of life, whether by the lake, in a backyard or on a restaurant patio. To celebrate the season ahead, here are five new or soon-to-reopen spots where you’ll find expertly grilled local fare, fresh frozen treats, lakeside sips or dressed-up hot dogs.

The Living Is Easy

When part-time South Hero residents Kelly and Neil Gillespie decided to buy the sleepy Shore Acres Inn & Restaurant in North Hero in 2020, they did it on the condition that their friend Jason Hanny would move from Virginia to manage the place.

Hanny grew up in Buffalo, N.Y., in a multigenerational restaurant family and has degrees in restaurant and hospitality management. Jobless due to the pandemic, he accepted the Gillespies’ offer as soon as he flew up and saw the beautiful spot, he recalled.

After doing a light refresh of the main inn building and restaurant, the trio decided to go big and take advantage of Shore Acres’ waterfront by adding a lakeside bar and casual restaurant on the north side of the 46-acre grounds. Hanny expects the new spot to open for daily lunch, dinner and drinks by the end of June or the first week of July.

The name Bravo Zulu, a naval signal meaning “well done,” pays homage to Neil’s stint as a U.S. Navy lieutenant. In addition to the all-weather, 72-seat patio with retractable awnings and walls, the restaurant will have boat docks, picnic tables, Adirondack chairs and firepits to which the staff can deliver food and drink.

“We want to have fun with the property,” Hanny said during a recent tour of the construction zone, noting that it’ll be the 18th restaurant opening of his career. All of this fun adds up to some serious investment, which Hanny estimated at $2 million.

Jim Buck, formerly of the North Hero House, will be Bravo Zulu’s executive chef. He is developing a menu of shareable bar snacks such as peel-and-eat shrimp, chips and housemade dips, and skewers (ahem, “stuff on sticks,” per the menu) of cola-and-hoisin-marinated steak or curried seitan and vegetables. Mains include maple-and-cider-brined roast chicken, fish and chips, burgers, and flatbreads.

The cocktail program nods to Neil’s navy background and another piece of his personal story. Half of the menu, titled “Friends of Neil’s,” consists of cocktails inspired by specific former navy colleagues, such as the Slither, made with blueberry vodka, house-infused blueberry simple syrup and lemonade.

Equally appealing are the nonalcoholic offerings, including a strawberry-pineapple sparkler and Cuddles on the Beach, made with cranberry, grapefruit and peach juices, and coconut water. That section of the menu is called “Friends of Bill’s” — a reference to the late Bill Wilson, the native Vermonter who cofounded Alcoholics Anonymous. Hanny shared that he and Neil met when Neil became his AA sponsor more than eight years ago.

The new venue’s tagline is “Make life BZ,” Hanny said. Bravo Zulu aims to make it easy for everyone to have a good time.

Everything about East Coast Ice is bright: the signs on the wood-sided shack, the spoons that change color, the rainbow array of icy treats and the smiles. Definitely the smiles.

Cindel and Kevin Otto started East Coast Ice last summer from a mobile trailer in the Big Lots parking lot in Essex Junction. This spring, they added the shack on the grassy area near Five Corners that was previously home to Nomad Coffee.

The couple fell in love with the smooth, sweet frozen treat known as “Philadelphia water ice” while on vacation in Florida 10 years ago.

“We decided to bring it here because we loved it so much, and there’s nothing like it here,” Cindel said. “It’s paradise in a cup.”

A lot of people expect shaved ice, Cindel said, but Philadelphia water ice is closer to a creamy sherbet or Italian ice, minus the actual cream: It’s dairy-free, nut-free, gluten-free and vegan. East Coast Ice’s offerings are made from water, sugar and a rotating choice of 14 flavorings, including strawberry, watermelon, piña colada, creamsicle, Vermont maple, mint-chocolate chip and Swedish fish.

The real fun comes in mixing flavors, whether for a tropical twist such as Island Breeze (passion fruit and mango), the patriotic U.S.A. (a red, white and blue swirl of cherry, lemon and blueberry) or a DIY combo.

“It’s nice seeing people sit and enjoy, instead of just getting into their cars and going,” Cindel said of the new location, which offers seating at picnic tables and cabana-like benches. “And kids can run around when they’re done eating their ice.”

The vivid ices are a big hit with the younger demographic, Cindel said, and the couple’s younger daughter confirmed it with a big, smiling nod. Her favorite flavor is cotton candy, which comes in a pink and blue swirl.

The color-changing spoons are also a hit: Stick one in a cup of ice and watch it change from pink to purple or yellow to green.

“People collect them,” Cindel said. “And not just the kids.”

One of Stowe’s hottest new après-ski spots is gearing up for après swim. With its clever cocktails made from local ingredients — sourced as locally as the farmers market across the street, which opened for the season on May 15 — Après was already a solid summer stop. Now it’s adding more eats. Through September 20, Burlington-based pop-up Good Grocery will show up regularly on the bar’s spacious patio and serve charcoal-grilled, vegetable-heavy dishes.

Christopher Leighton opened Après in November 2021, creating a chic cocktail and wine lounge inside the new Stowe location of beauty store and spa Mirror Mirror. He shows off his years of bartending and distilling experience with drinks such as the Root of the Problem, a delightfully orange mixture of vodka, Benedictine, freshly juiced carrot and lemon, garnished with a watermelon radish.

Après has carried soups from Good Grocery chef-owner Henry Long since it opened, but this summer’s full-service pop-ups will amp up the collaboration between the two new businesses. Good Grocery will be on-site most Wednesday, Friday and Saturday afternoons and evenings, serving a selection of shareable small plates and larger-format dishes that feed two to three people, such as smoked chicken wings or bone-in Wagyu rib eye.

“I knew I could help [Leighton] out here, because limitations work to my benefit and make for the best food,” Long said.

He’ll cook on two induction burners and a charcoal grill — his signature tool, which he used last summer at Good Grocery pop-ups on the lawn at Burlington’s Bayberry Commons.

“People ask what style food I cook, and I tell them I burn things over charcoal,” Long said with a laugh.

Burnt or not, Long expertly balances the intense flavors and char of the grill with fresh herbs, crisp salads, and bright dips and sauces.

Long works closely with Hinesburg’s Reap & Sow Farm to source vegetables and also gets most of his meat locally, including Wagyu from Sheldon Creek Farms. The Wagyu is a key component of Good Grocery’s signature dish, kabob spiced with sumac and Aleppo pepper and served with a wheatberry-cucumber salad, garlic yogurt, hummus and herbs.

Long is working on establishing a brick-and-mortar home for Good Grocery, and he teased that this might be the last chance to get his food straight off the grill. 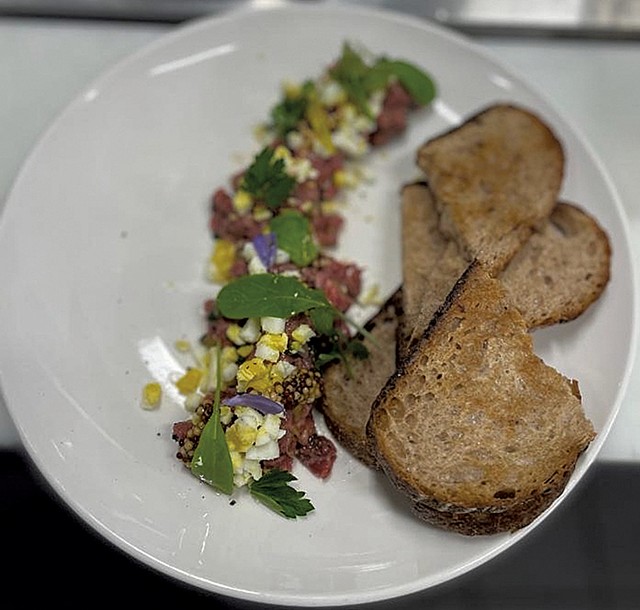 After two years, the stately Inn at Shelburne Farms reopened on May 13 for overnight stays and dining — with one big caveat. For the foreseeable future, those who want to eat in the elegant, marble-floored dining room or on the terrace with its gorgeous views of the gardens and lake will need to book a room to go with their dinner reservation.

As the inn and restaurant get back up and running after the long pause, staffing has been a challenge, said Robin Turnau, the nonprofit’s chief advancement officer. Management hopes to open dining to the public by the end of June, but that will depend on hiring progress.

Executive chef John Patterson, who joined Shelburne Farms in 2019, said he looks forward to his first season helming the inn’s restaurant. During the pandemic, he and a skeleton crew made prepared foods with many farm-raised ingredients for sale at the property’s welcome center.

At the season’s start, he’ll be on the line daily cooking breakfast and dinner, he said, working mostly solo except for five Culinary Institute of America interns.

The chef always planned to build a training program at Shelburne Farms, but he didn’t anticipate doing it alone. He said he has managed to hire a chef de cuisine and an executive sous chef who will relocate from Key West, Fla., and New Orleans, respectively, over the next month.

“It’s like going into battle with only generals,” Patterson said. “We really need experienced line cooks.”

The staffing crunch has driven a new approach to the opening dinner menu, Patterson said. Relatively small, it will be served to each table family-style, rather than plated individually. The focus on seasonal and local fare will remain.

“[Dishes] will be a really true expression of what’s popping at the moment,” Patterson said.

That might mean whipped ricotta with fresh peas and mint served with house-baked focaccia, or braised beef short ribs with local polenta and glazed turnips. Farm-grown shiitake mushrooms might be marinated in mirin and white soy, then charcoal-grilled and served with pine shoot vinegar made with spruce tips foraged on the property.

“After two years, I feel an immense amount of pressure,” Patterson said. But, he added, “I’m very excited to be cooking and putting things on plates.” 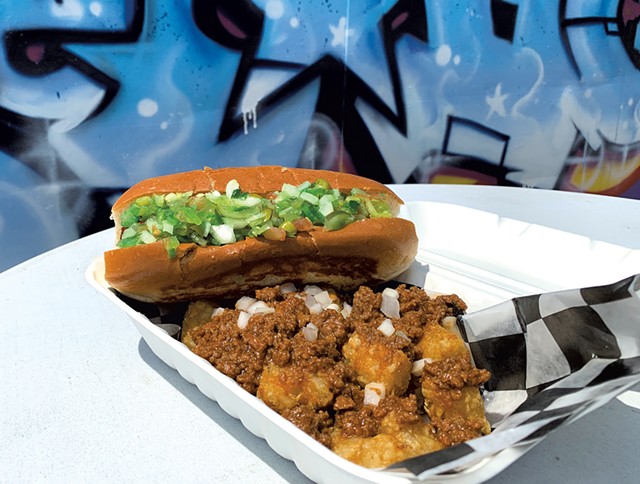 As of the first weekend of May, chef-owner Darrell Langworthy and his team are running three food destinations just off Five Corners in Essex Junction.

In addition to Mark BBQ and Heart n Soul by Mark BBQ, which are side by side at 34 Park Street, Langworthy has opened Skreet Doggs, a brightly painted, seasonal food truck parked across the street in front of the former Domino’s Pizza.

The name of the new, hot dog-centric business is a play on “street dogs.” It also honors a young soldier with whom Langworthy served in the U.S. Army.

“He was a super good dude who is no longer with us,” the chef said. “He’d always say he was from the skreets. I’d say, ‘You mean streets.’ And he’d say, ‘No, skreets.’ So we nicknamed him Skreet Dogg.”

Many of Skreet Doggs’ menu items start with an all-beef Vienna hot dog or a housemade sausage dressed up in various regional styles. The New Yorker boasts housemade sauerkraut and diced onion. The Texas Red is a spicy sausage with peppers and onions. The Chicago takes all of the toppings of a traditional Chicago-style hot dog and turns them into a compellingly pickle-y, kicky, crunchy relish with an only mildly disturbing neon-green hue.

Manning the grill last Thursday, chef Shaun Trepanier recommended that I get my order of dirty tots with a sprinkle of raw diced onions. “It brings it all together,” he said, and indeed it did.